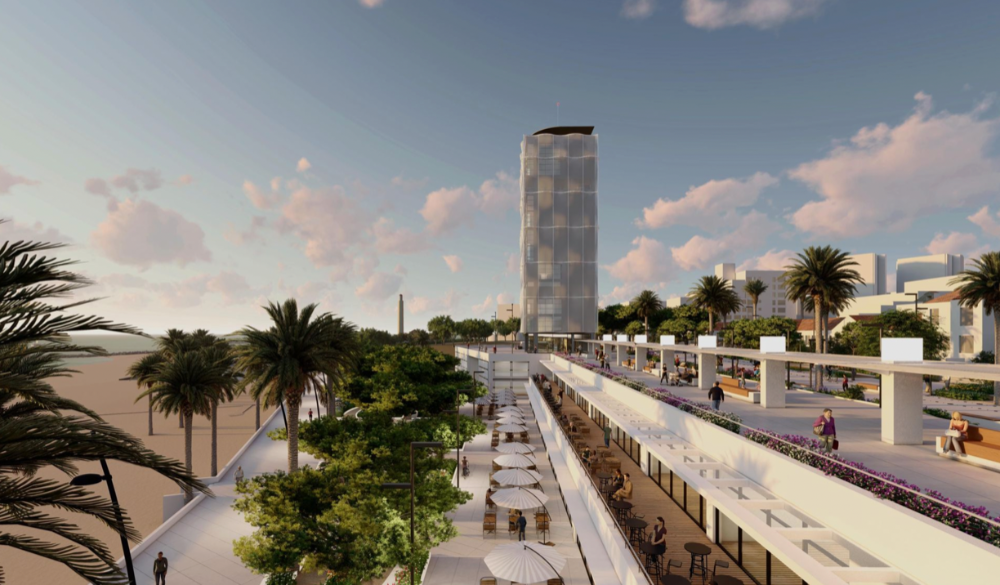 The project to remodel Avenida de España will be a pioneering initiative that will place Estepona at the forefront of sustainable cities, which are committed to quality of life, the well-being of citizens, the environment and large spaces for pedestrians.

The concept to create a modern city that will open up to the sea, In this way, Estepona will unite its urban centre and the heart of its economic and social activity with the tourist attraction that the sea entails, with the continuous revitalisation of the entire strategic enclave of the municipality.

The integral remodelling will have an investment of more than 1.5 million euros and will be co-financed with the Sustainable and Integrated Urban Development Strategy (EDUSI) 'Estepona, Garden of the Costa del Sol' of the European Regional Development Fund (ERDF).

It should be remembered that the City Council of Estepona has carried out the recent remodelling and modernisation of the infrastructures of the promenade, so that the project of remodeling and pedestrianisation of Avenida de España is configured as a continuity, towards the city, of this promenade.Thus, the avenue becomes a place of transition between the city and the sea, with a more pleasant, quiet, safe space, open to pedestrians and where nature predominates.

There is no doubt that with this new strategic project, Estepona continues to move towards a modern, dynamic, attractive city that generates employment and wealth; also placing itself at the forefront of sustainable urban planning and abounding in the city model promoted during the last decade, which has proven to be an urban planning of success, empathy and acceptance by citizens.

It is worth mentioning that this initiative on Avenida de España is complemented by the project already underway to create a Balcony to the Mediterranean; a project that bears the seal of the prestigious urban planner Salvador Moreno Peralta and that is already in execution on Avenida de España, on the section next to the Lighthouse. This strategic project for the city, expands cultural and leisure services, provides a new tourist emblem to the municipality and generates a new public space open to pedestrians, of more than 15,000 square meters, in another privileged enclave of the city.

Likewise, this initiative is also complemented by the future urban remodeling of Avenida de España, in its section between the roundabout of Avenida Juan Carlos I and Calle Delfín, which will entail the same model of urban remodeling.

The integral remodelling of Avenida de España, in detail, the scope of action affects the section of Avenida de España between the roundabout of Avenida Carlos I and Calle Terraza. This avenue is historically the main avenue of Estepona since it crosses the city from east to west along the coastal strip forming part of the old N-340.

The pedestrianisation of the street, of course, will respect the road access to the existing parking lot and contemplates the relocation of the existing loading and unloading areas, as well as the taxi rank, which is moved to the eastern area of Avenida de España, the project contemplates the demolition of the entire area of action to create a large pedestrian boulevard surrounded by planters. This demolition will cover an area of 5,286 m2.

Although this area will be used mainly for the use of pedestrians, it will also have a lane for bikes and will occasionally allow road traffic for emergency vehicles. In the design of the pavement, special emphasis is placed on the elimination of architectural barriers to favour an inclusive city. Likewise, the complete renovation of the sanitation network is planned, replacing the fecal and rain collectors, and providing a new design and discharge solution for the new planned separative networks.

Gardening and landscaping play a major role in this project. In this way, the entire existing grove will be respected and protected, including them in the planned new planters. The most suitable tree species have been chosen and that bring the greatest landscape value to the environment. These are palm trees, palm hearts and trees of the pomegranate, mulberry, chorisias and holm oak species. Along with the planned tree species, a wrapping approximately one meter wide will also be placed in each of the planters around the edge of the planter made up of perennials and upholstery, and in the central part the trees will be completed with shrub species.

The organic design of the planters allows to mark the flows of movement, managing to provide the space with the fluidity of natural spaces. It is a recreation of the trails that are naturally formed in nature by the passage of people or animals. In this way, by leaving a generous free space between the various planters, the transversal flow between the urban center and the sea is allowed. Likewise, to give a more organic look, the creation of soft mounds will be carried out inside the planter itself so that we generate a more natural environment. It is also planned to provide these new areas with ornamental scenic lighting using LED technology. It is worth noting the aesthetic potential of artificial lighting as a tool in the design of parks and gardens, creating and accentuating silhouettes, accentuating the perspective and the three-dimensional effect.

The street furniture will be distributed throughout the avenue in a homogeneous way. The project also has three passable fountains that are located distributed along the new remodeled avenue.
The planned bike path will not alter the aesthetics and uniformity of the pavement nor will it pose an obstacle for people who circulate crossing the avenue between the urban center and the promenade. That is why this bike lane will be limited only by two alignments of stainless steel sheets or pins. The width of this dual-circulation lane will be two meters and will be shared punctually by emergency vehicles.

Alternative mobility. Ring road round In this decade, the City Council has made an important effort to improve urban mobility. Thus, among the main actions carried out, the creation of the northern ring road round stands out, it has allowed a large road infrastructure that backbones the city, and that connects the urban centre from its eastern area to the northern area of the Fair Park-Auditorium-Athletics Stadium and its connection with the A7. Promotion of inclusive parking. Pioneering parking plan one euro a day.

The sustainable city model open to pedestrians has been accompanied by the creation of a pioneering network of parking lots in the city at a cost of 1 euro a day for the user. This network has car parks in the heart of the city, such as the central Antonia Guerrero square, and on the outskirts of the historic center such as San Lorenzo Avenue and in the Athletics Stadium area. The parking lot is currently under construction in the central Chess Square and in the new Town Hall. In total, more than 2,000 new parking spaces have been created throughout the city through the reorganisation of spaces and the creation of new parking facilities.

8896 Views
Register for our newsletter