Why We Love Malaga ! 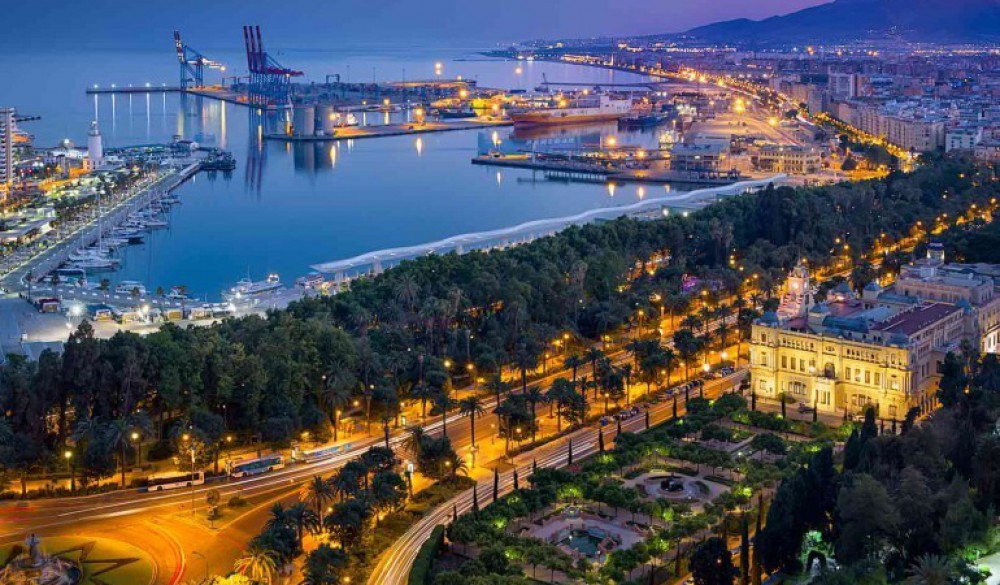 Chances are you've been to Malaga. Well, the airport at any rate. Every year, millions of us pass through on the way to the beaches of the Costa del Sol or palaces of Granada. But, now, the southern Spanish port is having a moment. Thanks to a multi-million pound regeneration project, and several new galleries and museums, this once down-at-heel city has become one of Europe's hippest destinations. Along with a thriving cultural scene, there are good restaurants, great shopping and exciting nightlife. June saw the opening of Centre Pompidou Malaga, the first of several popup versions of the famous Parisian gallery planned outside France.

It is housed in a low-slung white building topped with a giant glass cube in the trendy harbour area.

When I turn up, a large crowd is queuing to pay the £6.70 entrance fee to view 90 works by artists such as Miro, Magritte and Picasso on loan from the Pompidou in France, plus an exhibition exploring dance and choreography There's a brilliant room of self-portraits, including a Francis Bacon and Frida Kahlo.

Drawing a big huddle is Kader Attia's striking installation, Ghost — a mass of Muslim women in prayer, made from tin foil. Pompidou is the latest bold step in branding Malaga a 'City of Museums’. Across town, the first overseas branch of St Petersburg State Russian Museum has just opened in a refurbished tobacco factory.

Next  door is the Malaga Automobile Museum, an extraordinary celebration of cars, fashion and art.

By 2016, a Museum of Fine Arts and Archaeology will complete the set. Malaga's Picasso Museum opened in 2003 — a long-held dream of the artist, who was born in the city in 1881.Near the Pompidou is the city's botanic gardens, rated as one of the best in Europe and bursting with palms, exotic plants and squawking birds. Also to see are the Moorish Alcazaba fortress and Gibralfaro castle, where you can enjoy fabulous panoramic views of the city. Visitor numbers are already soaring — with some people saying Malaga will be like Barcelona in ten years' time. I'm tempted to agree with them.

Malaga Airport is the third largest in Spain, after the airports in Madrid, Barcelona. Connections to other Spanish and European cities is easy and there are many low cost airlines that are now coming to Malaga, so it is getting more inexpensive to travel to Malaga. Work is now going on to build a second runway and a new passenger terminal has just been inaugurated, so the capacity of the airport has doubled. Easy access to Malaga is very important for tourism, because tourists lose enthusiasm when they have to make too much effort to reach a tourist destination.

Few tourist destinations in Spain have as many cultural offerings as the Costa del Sol. A very large number of artists, both Spanish and foreign, live in the Costa del Sol because the light is marvelous, which makes painting appealing. There are a large number of cultured people, again both Spanish and foreign, who enjoy the arts in the city. Among the major cultural offerings are:

a. Picasso Museum - Pablo Picasso was born in Malaga and this museum shows his work. It is one of the few museums that show representative work from each of his seven different work periods, from the Blue Period to Cubism.

c. Cathedral - Started during the Renaissance. This is one of Spain's most beautiful cathedrals.

d. Alcazaba and Roman Theater - The Moorish fort on the hill overlooking Malaga is the best preserved Moorish fort in Spain. At the bottom of the fort is the Roman amphitheater.

e. Museo del Vidrio y Cristal - The new museum of glass and crystal is housed in a beautifully restored 18th century palace and is one of its kind in Spain.

f. Basilica of La Victoria - One of Andalusia’s most beautiful Baroque churches.

i. Palacio Episcopal - The Archbishop’s palace is a beautiful Baroque building that has large art exhibitions that change every two months. Entrance is free.

k. Gibralfaro Castle - The Moorish castle is on top of the Gibralfaro Mountain and has the best views of the city below.

l. Museum House of Dolls - This museum has 50 miniature houses and is the best museum of its kind in Spain.

o. Archivo Municipal - There are many temporary exhibitions in this building, always free to the public.

Malaga has a Thyssen Museum and exhibits part of the Carmen Cervera Collection. The 16th century Palacio Villalon is now been remodeled to be the new museum. There are about 10 new museums that are on the way for the city. Work is continuing in the Palacio de la Aduana to house the Museo de Bellas Artes and the archaeological museum.

There are some exceptionally beautiful gardens in the Costa del Sol.

a. Malaga Park - In the heart of Malaga, adjacent to the port is the Malaga Park, a hundred year old park that has been recently remodeled. This park is known for its semi tropical plants and is 800 meters long.

b. The Garden of Pedro Luis Alonso is located by the Town Hall and has a beautiful rose garden that contains 10,200 rose bushes, with 70 different varieties.

c. The Botanical Gardens of La Concepcion - On the outskirts of Malaga are these huge semi tropical gardens, the biggest garden of this kind in Europe.

Malaga has a big transportation interchange building, called Vialia (Maria Zambrano Station), where one can take the AVE, the Cercanias train, and the bus to other cities in Malaga or to other provinces. Vialia is one of the biggest of its sort in Spain, making transportation connections easy. Malaga is also building a Metro system that will also be connected to Vialia. The bus system in Malaga is easy to use and it goes everywhere one wants to reach in the city.

The small town of Benahavis, close to Marbella, is calling itself the culinary capital of the Costa del Sol and boasts about 20 good restaurants. The town gets crowded on weekends as people flock to these restaurants.

The Costa del Sol now has five one-star Michelin restaurants, which goes to show that good food can be found here.

There are hundreds of chiringuitos (inexpensive fish restaurants) along the Costa del Sol, where one can eat fresh fish. The ones on the beaches of Torremolinos are especially popular. Besides fish they also serve meat dishes and salads.

In Malaga one can eat at many inexpensive restaurants that have menus of the day, complete meals for a low price. There are very many good tapas restaurants too.

Barcelona is the most popular cruise ship destination in Spain, followed by Malaga. Malaga has just opened a new maritime terminal to handle more passengers

The Antigua Casa de Guardia (Alameda Principal, 18) is the oldest tavern in Malaga, and it was founded in 1840. One can try many different wines from Malaga, many which are stored in oak casks in the tavern. There is a very long bar, without chairs, where one stands while trying the wine. The atmosphere is that of the 19th century.

The Bar El Pimpi is a historic bar where many celebrities have gone and where one can have wonderful tapas while trying their wine selection. There are many other good bars in town.